RHA Study Published in the ‘Journal of Water and Health’ 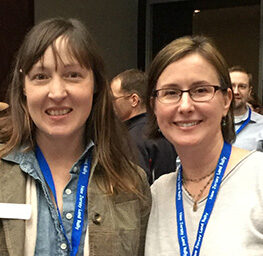 It’s a dilemma in many rural areas in New Jersey and beyond: How can people be sure that the well water they and their families drink is free from contaminants?

According to Raritan Headwaters Association (RHA), a nonprofit working to protect clean water, the simple solution is for all homeowners with wells to test their water for an array of potential pollutants. But it’s easier said than done.

The fact is that the majority of well owners–including those in the upper Raritan River watershed in Hunterdon, Somerset and Morris counties–don’t test their water. This can have health consequences if groundwater turns out to be contaminated with common pollutants like coliform bacteria, arsenic, nitrate, radon and uranium.

In an effort to get more well owners to test their water, Raritan Headwaters has been studying ways to raise awareness, including directly contacting homeowners in neighborhoods where well contamination has been discovered.

And RHA is now sharing its insights about the benefits of “hyperlocal messaging” with the world.

In an article in the Journal of Water and Health, an international scientific publication, RHA staff members Dr. Kristi MacDonald and Mara Tippett share information about their ongoing campaign to increase the number of private well owners who test. Raritan Headwaters has been providing local well testing since 1974.

“We found that providing residents with information about contaminants in wells near their home resulted in significantly higher testing,” said MacDonald, RHA’s science director. “That means more private well owners took action to protect the health of their families, which is the goal.”

“It’s all about motivating people and making the testing process simple and affordable,” added Tippett, a water scientist and head of RHA’s well testing program. “Having your water tested by a reliable laboratory is the only way to know for sure that it is safe to drink. Letting people know that there are resources available to make this an easy process empowers them to do so.”

Most wells not monitored

The article notes that about 13 percent of New Jersey residents – some 1.15 million people – get their drinking water from private wells. Of the roughly 300,000 private wells in the state, only 20–25 percent have been tested at least once. And many of those tests occurred because New Jersey’s 2002 Private Well Testing Act mandates testing when homes with wells are sold. 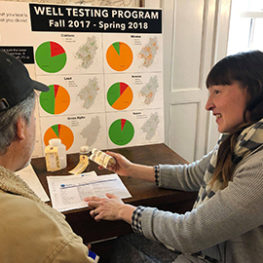 “This potentially leaves as many as 80 percent of the remaining wells in the state unmonitored for water quality. Thus, there is a critical need to better inform private well owners of the risks of contaminants exceeding drinking water standards in their well water in ways that will result in health actions including testing and treatment,” wrote MacDonald and Tippett.

In the Upper Raritan watershed of Hunterdon, Morris and Somerset counties, the region served by RHA, four out of five households rely on private wells for drinking water.

According to the study, there are many reasons why well owners don’t test. Some are unaware of health risks, assuming that the H2O coming from their tap is safe because it looks clear and has no foul taste or odor.

“Often, an assumption is made that the water is safe and testing is unnecessary,” wrote MacDonald and Tippett, citing earlier studies. “People also tend to be optimistically biased, believing their risk to be lower than others.”

Some may choose to not test because they habitually drink bottled water. Cost and convenience can also be obstacles to regular well testing.

The study tested the theory that providing residents with specific messaging about wells in their neighborhood failing to meet safe drinking water standards would increase the perception of personal health risk, thus leading to higher rates of testing and subsequent treatment.

RHA’s study focused on Bethlehem and Raritan townships, both located in Hunterdon County, and made use of more than 45 years’ worth of well testing data. Two types of communications were sent out:

Both groups were encouraged to test their well water through RHA’s discounted, confidential well testing program.

The study found that residents who received specific letters about contamination in a neighbor’s well were more likely to test their own well than were individuals who received a general letter about common contaminants in the region.

Of residents receiving specific letters, 8.2 percent tested their own well, as compared to only 2.2 percent of those receiving the general letter.

“Outreach that reports more localized, specific information on contaminants in well water results in an increased chance of testing as compared to more regional and generalized contaminant information,” concluded MacDonald and Tippett.

In a follow-up survey, most respondents indicated that testing increased their confidence in their well water – even in cases where they learned their water was exceeding the drinking water standard for a contaminant. In addition, nearly all respondents said they planned to test their well again in the future.

The study was funded by a grant from the New Jersey Water Resources Research Institute at Rutgers University. Raritan Headwaters, with partners from Rutgers, has since received a second grant from NJWRRI to study arsenic in groundwater.

Learn more about Raritan Headwaters’ well testing program and how to get your well tested here, or contact Tippett at welltesting@raritanheadwaters.org. The website also includes information about common well contaminants and their health risks.

Read the study, or go to the peer-reviewed article. 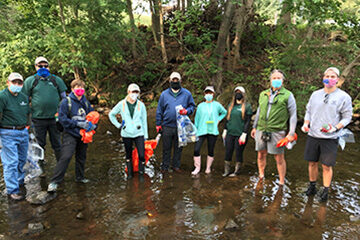 P-G Bank Teams with RHA to Clean up Local Stream

As a child growing up in Peapack, Rosanne Schwab spent a lot of time playing in the Peapack Brook with 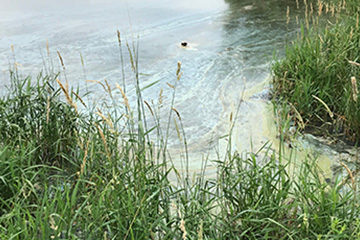 Harmful Algal Blooms Are Back

The cyanobacteria outbreaks that shut down many New Jersey lakes and reservoirs last summer have returned, threatening recreation areas and 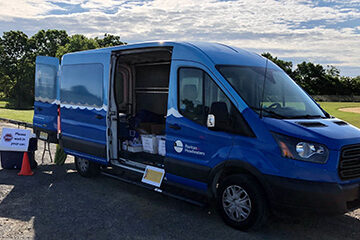 ‘Well Test Wednesdays’ Coming to a Town Near You