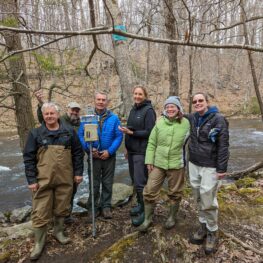 Freshwater resources face significant threats from climate change; this is especially true of headwater stream ecosystems, which rely on cold, oxygen-rich conditions to supply clean water to much of the planet’s population. There is a deficit in science overall on the impacts of climate change in freshwater systems, which is needed to inform decisions on short and long-term vulnerability to climate change and the steps necessary for effective climate resilience and adaptation planning.

Raritan Headwaters Association (RHA) was awarded a grant from the Royal Bank of Canada in 2021 to create an innovative program focused on the impacts of climate change within our watershed’s freshwater systems. RHA plans to conduct scientific monitoring and data communication to fill this crucial gap through our brand-new long-term monitoring program called Raritan Headwaters Sentinel Climate Stations Project.  RHA installed 5 Mayfly Enviro DIY Climate Stations in 2022 to collect and transmit continuous data on stream temperature, conductivity, and water depth to our website so it can be viewed and downloaded by municipal decision-makers, scientists, educators and students, fishing clubs, and state environmental agencies.  Scroll down to access our data!

How Climate Change Impacts You

The International Panel on Climate Change’s Fourth National Climate Assessment warns of severe ecological, economic, and social consequences for globally over the next half-century. NJ has already seen a 3º F rise in temperature and an increase in rainfall and major storms over the last century; this trend is expected to accelerate.  In coastal areas, sea level rise is consuming valuable coastal fish and wildlife habitats and property.  Throughout NJ, stormwater runoff has increased greatly, bringing pollution from the land, including fertilizers, pesticides, bacteria, and higher temperatures and damaging floodwaters into our streams, rivers and lakes causing significant impacts to water quality, stream habitat, our drinking water and our homes.

Municipalities in NJ are now required by the state to develop climate resilience plans for incorporation into Master Plans.  Tools for helping local officials develop plans may be found in the Resilient NJ Local Planning For Climate Change Toolkit (arcgis.com).

The International Panel on Climate Change 6th Climate Assessment, focusses on regional impacts of climate change and ways we can adapt to address vulnerability.

The  Climate Stations will collect the following data: water depth, conductivity, and water temperature every 15 minutes via cellular transmission through over 470+ carriers. Our data is shared in real-time and is displayed by clicking on the individual climate station ID.  RHA is also developing an interactive Climate Change Dashboard, which will guide decision-makers in responding to climate threats and serve as a nationwide model for environmental organizations and communities.  When combined with data on biodiversity, habitat, and chemical parameters already collected by RHA as part of our award-winning stream monitoring program, we will be able to better understand and plan for the ecological, economic and human-health impacts that climate change is having on our streams and our drinking water supplies.

Click on a climate station parameter below to view its description.

Water depth is the measurement of the distance between the surface and the bottom of a waterbody. Water depth can be used to calculate discharge or “flow” in cubic feet/second (CFS). Discharge is calculated by developing a graph of the relationship of depth to volume and then comparing depth measurements against this graph. Our project partners at Stroud are working on a display to show discharge as well as depth.

Units: (°C)
Water temperature is displayed in degrees Celsius. Water temperature is inversely related to dissolved oxygen concentration in the water (higher temperatures means lower oxygen), which affects the ability of fish and other stream organisms to survive and reproduce.  Temperature also increases the rate of photosynthesis and plant, algal and bacterial growth, which can result in further decreases in oxygen levels and increased presence of toxins, parasites, and pathogens in the water. All aquatic organisms are dependent on certain temperature ranges for optimal health and in the Upper Raritan our streams are cold and able to support sensitive species such as our native brook trout. Temperature is primarily controlled by climatic conditions, influenced by heavy precipitation (rainstorms), snowstorms, and the amount of sunlight present, but can be impacted by human activities.

Conductivity is a parameter that measures the ability of water to pass an electrical current. Conductivity in water is affected by the presence of inorganic dissolved solids such as chloride, nitrate, sulfate, and phosphate anions (ions that carry a negative charge) or sodium, magnesium, calcium and iron, which are ions that carry a positive charge. Road salt, fertilizers, septic systems and wastewater treatment discharge are major sources of dissolved ions and these generally increase after precipitation or with snowmelt as heavy runoff enters streams.  This measurement can also be affected by temperature, the warmer the water, the higher the conductivity. At specific conductance levels above 235 µS/cm, trout and sensitive macroinvertebrates such as mayflies, stonefiles and caddisflies are negatively impacted.

The climate stations are powered by multiple power resources, including solar panels. The graph displays the measurement of how well the solar panel on the sensor station is charging the battery. This is used to help maintain the sensors and unit overall.