I fell in love with American Kestrels in the early 1970’s. We lived outside of Oswego, NY, where my father taught mathematics, and our neighborhood was surrounded by farmland. On our family walks—both of my parents were birders—we would see many birds, but Kestrels were among our favorites. We were mesmerized by the extraordinary ways that their tiny bodies moved, as they hunted along the roadsides near our home. I think I just liked their very hip 1970’s sideburns.

Fast-forward to 2019, Jason, my husband, and I bought a 43-acre property in Oldwick, NJ. It is about a quarter mile down a dirt road, surrounded by rolling and picturesque farmland, and as you enter the property, you are faced with a 13-acre rectangular field, now with a barn and house in mid-construction. To the north of our farmland, there is a 5-acre wetland, with three massive old willows, in various states of decay. And then, beyond the field to the east is a 25-acre woodland, consisting of mostly red maples, red cedars and a few walnut, sycamore, hickory, and oak. There is a brook that winds its way through from north to south, between the field and the woods. It is beautiful and a haven for all kinds of wildlife.

When we first walked our land, we imagined creating more and better habitat than what existed there already. And included in this plan was a desire to put up all kinds of nest boxes. Wren and Chickadee houses were easy. And so were Bluebird and Wood Duck boxes. Kestrel boxes required ladders and digging massive holes. My neck was not cut out for that kind of work.

In February of 2020, we were invited to a “woodcock walk” at a local preserve managed by the Raritan Headwaters Association. The evening was magical, with a full moon, mild temperatures, and a woodcock doing his mating sounds and dance. A fox brayed; a great horned owl appeared. And we met some wonderful people who introduced us to more wonderful people. All of them dedicated to this vital organization.

Which brings me to November, during the COVID pandemic, and a lovely afternoon spent walking the same preserve, which I have visited every week since moving out here. I met Dr. Kristi MacDonald, Director of Science for RHA. Beth McConnell, Development Consultant for RHA, whom I had met in February, made the introduction. Both of them were excited to help me put up my Kestrel boxes. I didn’t realize that they had an outreach program, and worked with Bill Pitts from the NJ Fish and Wildlife, Endangered and Nongame Species Program. In the last two years, they mounted and monitored 18 boxes on private and preserved lands in and around the region. I thought they did me the favor, but they saw it as I did them the favor. A win-win-win. (Me, them, the Kestrels.)

In early December, Bill and Kristi met me on the property to take a walk around and see where we might mount the boxes to be the most successful. Kestrels are particular, as they should be. It cannot be too noisy, or with too many trees, and the nest box opening should not face north. Despite a snow-covered ground, and once we stopped looking at all the fox, mice and deer tracks, we were able to find two spots on the perimeter of our field and got to work with a post-hole digger and a tamping bar. Kristi had supplied both of these tools. Bill had a drill, a ladder, and a second nesting box. The first one I supplied; it was a birthday present from friends who knew me well. We spent about 5 hours to get both of the holes dug and the posts in the ground. (My neck was sore and my toes were frozen.) The posts were red cedar, harvested from our back woods. Jason cut them down, and sized them to 14 and 16 feet each and removed all the knobs. The three of us managed to put the posts up. A week later, Jason and I refilled the holes that had settled, causing the posts to shift in position a little. All is right after more tamping and more fill. They seem to fit right into the landscape. Now we wait and hope that a pair of Kestrels finds their way there, to boxes #19 and #20 of the RHA Kestrel Program.

If you are interested in learning more about the Raritan Headwaters Association’s Kestrel restoration project, head here. 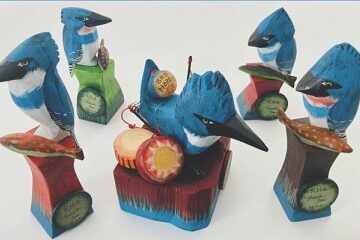 The coronavirus pandemic has made everything more challenging during the past year, including running a nonprofit organization. But with the 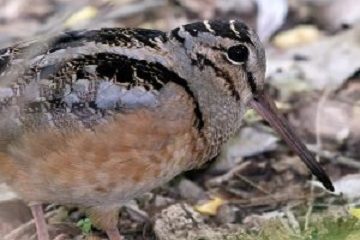 What Is a Woodcock?

The woodcock is a robin-sized, stocky bird with short legs, neck and a long bill, colored in shades of brown,