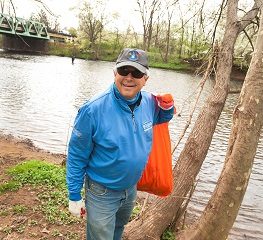 It’s not a glamorous job, picking up trash along the banks of the Raritan River and its tributaries. But from an environmental standpoint it’s a necessary job, preventing litter – especially plastics – from washing downstream and into the ocean.

Each spring, nonprofit watershed watchdog Raritan Headwaters Association organizes a massive Stream Cleanup. This year’s event was held Saturday, April 17, with over 1,700 volunteers picking up trash and recyclables at 70 sites in Somerset, Hunterdon and Morris counties.

One Stream Cleanup “regular” for many years is state Senator Christopher “Kip” Bateman (R-Dist. 16), who works with a group at the North Branch Reformed Church site in Branchburg Township.

“I always enjoy it,” said Bateman, one of the Legislature’s most dedicated environmental advocates. “It’s been quite a few years and it’s always been rewarding.”

Over the years, he said, the North Branch site has become cleaner as a result of volunteer efforts and increased public awareness.

“We still see a lot of plastics, but the volume is less because I think the cleanup definitely makes a difference,” Bateman said. “More people are also becoming conscious about the environment. I think a lot of people realize they have to be careful, because whatever they throw out ends up in the river and ultimately ends up in the ocean.”

The senator added that he’s heartened to see a lot of young people, including Boy Scouts and Girl Scouts, participating in the cleanup. “They’re going to be inheriting this Earth, so they feel an obligation and that’s good,” he said.

Bateman, who recently announced that he will retire from the Senate as of next January, credited his father, the late Senator Ray Bateman, with sparking his environmental ethic. “We had a place in Maine and I spent a lot of time outdoors,” he recalled. “Early on, I took an interest in the environment.”

As a certified scuba diver, he added, he’s seen “a lot of neat things” in the ocean – but also a lot of plastic and other pollutants that harm marine life and water quality.

Bateman serves on the Senate Environment and Solid Waste Committee, where he has championed numerous bills to ensure clean water, clean air and healthy land and wildlife.

Bateman is especially proud that New Jerseyans, by a 2-to-1 margin, voted in favor of an amendment to the state Constitution to ensure permanent, dedicated funding for the preservation of open space, farmland, historic properties and flood-prone “Blue Acres” land.

“It shows you that people really do care about the environment and think it’s important,” he noted. Taxpayers don’t like to spend money, he added, “but if it’s for a good cause, people will do it.”

Throughout his 27 years in the state Legislature – first as an Assemblyman from 1994-2007and as a Senator since 2008 – has become known for supporting bipartisan bills to benefit the environment.

“My Senate Republican colleagues don’t always go along with me; they don’t always feel it’s as important as businesses or whatever,” he said. “It’s frustrating, especially with Republicans at the national level.”

For instance, he doesn’t understand politicians who don’t support measures to reduce the impacts of climate change. “You have to be a fool not to believe in climate change with what’s happening around the world – more severe storms, the melting of icebergs and everything else,” Bateman said.

“The issue of the environment is not partisan, and it should not be partisan,” he added. “It doesn’t matter whether you’re a Republican or Democrat, what’s important is doing positive initiatives to make sure we leave this place cleaner that what we found.” he added.

Before leaving office, Bateman would like to see the passage of the “Green Amendment” to the New Jersey Constitution, which guarantees citizens the right to a clean environment.  “If it’s in the Constitution, that gives it more teeth,” he explained.

Bateman is also working toward passage of a bill to require more food waste to be recycled and reused. He noted that many foods in supermarkets can’t be sold once they’ve passed their expiration or use-by dates, creating a massive amount of waste. Using still-viable foods to manufacture pet food, for example, would prevent tons of food from being dumped in landfills and creating methane gas.

Although Bateman is retiring from the state Senate, he said “absolutely” intends to continue as a volunteer at Raritan Headwaters’ annual Stream Cleanup. “I appreciate the work this organization does and I hope we can continue. I love New Jersey, I’ll still be here and I’ll be as active as I can,” he vowed. 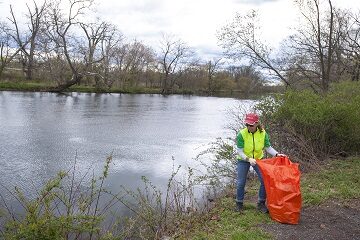 As New Jersey’s Covid-19 cases continue to drop, the nonprofit Raritan Headwaters Association (RHA) is bringing back its massive Stream 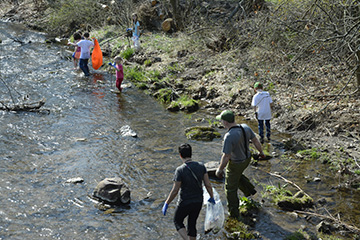 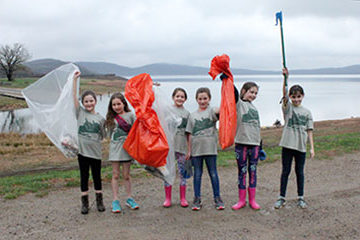 What can a motivated, energetic group of volunteers accomplish in just three hours? In the case of Raritan Headwaters Association’s