Habitat (where to find it?):    There are over 655 species of salamanders, 1/3 of which can be found in North America.  They are Amphibians which means they need to live in moist areas to survive.  They are cold blooded and are able to breathe and absorb water through their skin.  They also spend different parts of their lives in water and on land. 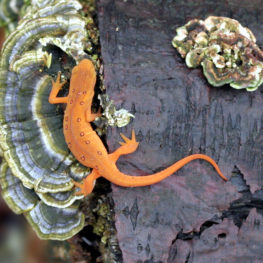 There are 4 distinct life cycles of the Eastern Red-Spotted Newt; 1) egg, 2) aquatic larva, 3) eft (terrestrial adult) and 4) newt (aquatic adult).   In the Spring female newts lay 200-375 eggs by attaching each one individually to aquatic vegetation.  The eggs hatch within 5 weeks and the tiny larvae (¼” to 1” long) live in water for approximately three months.  Their skin is olive colored and they have feathery gills.

Come Fall the larvae, having shed their gills, move onto the land where they live as efts (no not elfs) for 3 to 4 years.  They now sport a bright red color that warns predators of a poisonous toxin that is secreted by their skin.  They have a smattering of small black spots on their backs with several larger black-bordered orange spots along each side of their backs.   They spend winters hibernating under rocks and logs.

At maturity the Eastern Red-Spotted Newt returns to the water.  The aquatic adult has a more flattened tail than the eft and is a yellowish-brown to olive green in coloring with the same characteristic black-bordered orange spots.  They grow to be 2½” to 5½” long.

Conservation:   In 2013 a fungus known as Batrachochytrium salamandrivorans (Bsal) was discovered in Europe.  It attacks and kills salamanders.  It is believed that the fungus was spread by imported Asian salamanders into the pet trade.   In January 2016 the US Fish and Wildlife Service banned the importation of 201 salamander species in an effort to protect salamander biodiversity here in North America from the potential threat of Bsal.

Interesting Fact:   As a strategy for survival, newts are able to alter their life cycles.  For example, if a pond dries up a newt can revert back to being an eft and live on land.  If necessary, an eft can spend less time on land and mature into the water dwelling newt.