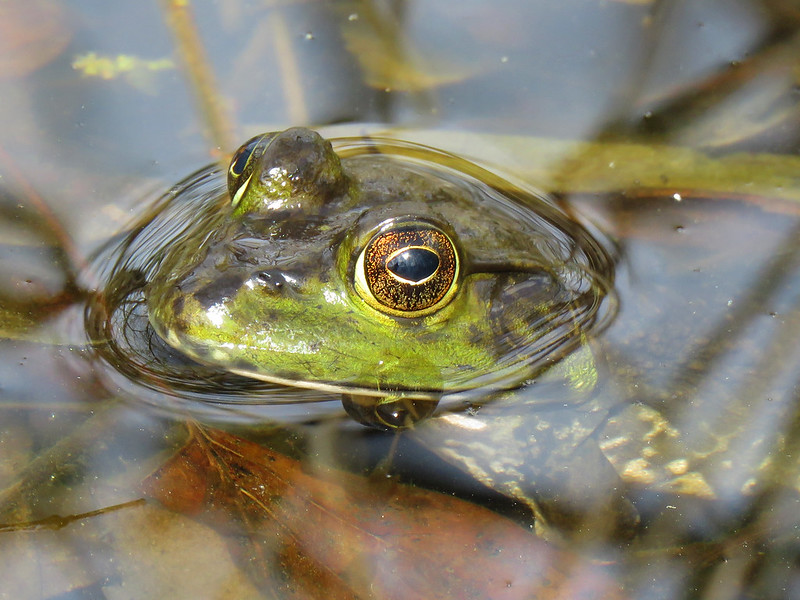 Habitat:  American Bullfrogs are found throughout North America, although they are not native to the west.  The exact native western limit of this species is unclear. In the early 1900’s American Bullfrogs were first introduced to Colorado and California.  They have also been introduced into southern Europe, South America and Asia.  Whether native or considered invasive all American Bullfrogs need to live in water.  They can mostly be found in the shallow, warm, still waters of rivers, lakes, ponds, and wetlands.

Food:  American Bullfrogs are nocturnal ambush predators.  They wait for passing prey, lunge at it with their strong legs, and devour anything that will fit into its open mouth.  Insects, birds, fish, snakes and small rodents are all fair game for the American Bullfrog.  They are also known to eat algae.

Behavior:   Winter for American Bullfrogs is a time for hibernation.  They bury themselves in mud by constructing small cave like-structures. 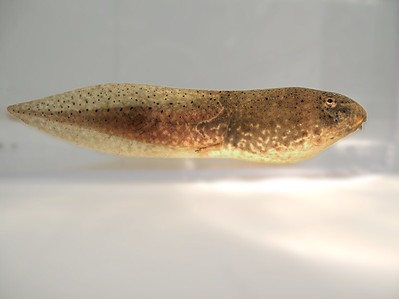 Life Cycle:   Here in New Jersey the breeding season for American Bullfrogs takes place between May to July. The males arrive first and begin their distinctive “jug-o-rum” bellows to declare their territory and attract females.  One female may lay as many as 20,000 eggs in protected quiet water.  While she lays her eggs the male rides on her back in order to fertilize them.    After four days the tadpoles emerge.  They are completely independent of their parents and can live up to three years in the tadpole stage.  Within 5 years the tadpoles reach sexual maturity and on average live to be nearly ten years old.

Conservation:  Many species of frogs are threatened due to habitat loss and diseases such as chytridiomycosis (caused by chytrid fungus).  The American Bullfrogs are known carriers of this disease and their numbers are increasing due to their opportunistic feeding habitats and high rate of reproduction (females lay 20,000 eggs at one time).  In many parts of the world and in western North America, American Bullfrogs were imported as a food source (frog legs are a delicacy in France).   Outside of their native region there are not enough natural predators to keep bullfrog populations in check.   In western US the invasive bullfrogs are preying on endangered species such as California Tiger Salamanders and Oregon Spotted Frogs. Strict laws are now in place to prevent any more bullfrogs from being dispersed outside of their native region.

Interesting Fact:  It was recorded that a Bullfrog in captivity lived to be 16 years old.