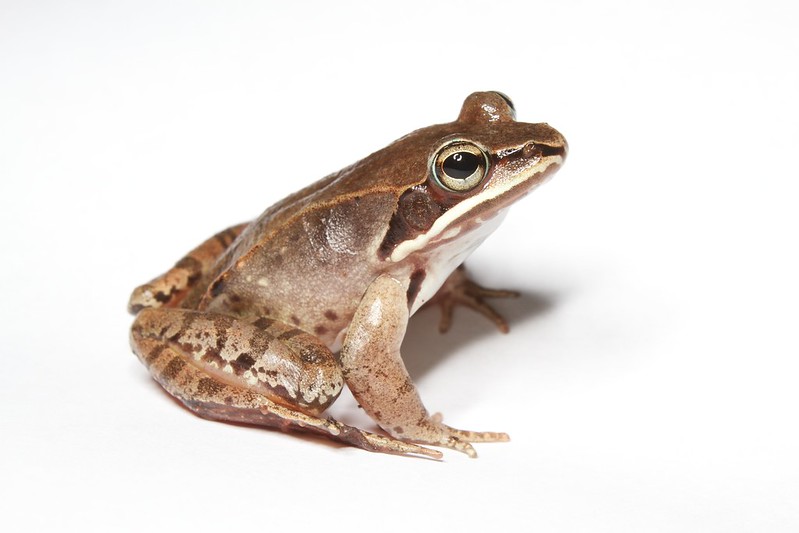 Habitat: The wood frog is found in deciduous, coniferous, and mixed forests; marshes; meadows; and swamps. It spends most of its time on the ground in woody areas except during mating season when it is found in vernal pools for breeding.

Behavior: Wood frogs are a diurnal species and therefore active during the day. They perform seasonal migrations to breeding ponds in late winter or early spring. Individual wood frogs generally return to the same ponds to breed year after year and will often migrate through the same area throughout their lives. Wood frog tadpoles have been shown to have the ability to recognize their own brothers and sisters! 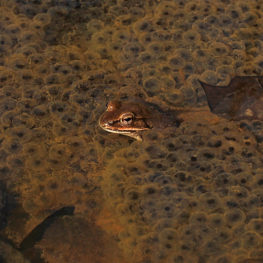 Life Cycle: Wood frogs are amphibians which means they spend part of their lives in water and part on land. They go under metamorphosis, changing in form. As young tadpoles also called polliwogs, they live in water and look like small fish with large round heads. They have gills and tails, but no legs. They will develop lungs and legs, lose their tails, and as frogs they will be able to live on land!

Conservation: The wood frog is not federally, or state listed as threatened or endangered.

Interesting Facts: The color of wood frogs ranges from nearly pink to shades of brown or black. The females are usually larger and lighter in color. Wood frogs are identified by a dark “robbers mask” across the eyes. If there were animal Olympics, they would certainly be contenders for the standing long jump! Some can jump 30 times their body length! This feature gives them an advantage over other animals for finding food and defending themselves. Because of this they have survived over centuries. They use their jumping ability to escape predators and pounce on a meal!