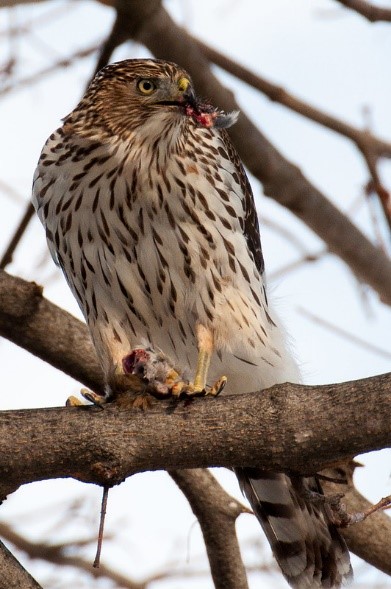 How to Identify:   Slightly larger than a Blue Jay, the Sharp-shinned Hawk is the smallest hawk found in North America.  They have small heads, rounded wings and a long tail.  Adults are slate blue-grey above with red-orange bars on the breast. Immature hawks are mostly brown with coarse vertical streaks on breast. 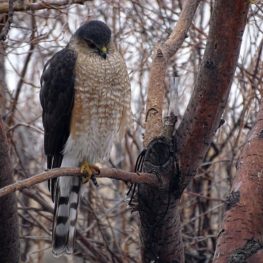 Habitat (where to find it?):   Sharp-shinned Hawks (Sharpies) can be found in forests and forest edges throughout North America.  They can also be seen in suburbia waiting to pick off song birds at feeders.  They breed in Alaska and Canada in dense forests and winter in Mexico south to Panama.

Food:  Sharpies are pursuit hunters that use cover and stealth to get close to their prey.  With a sudden burst of speed, they attack and capture the stunned prey with their lethal talons.   They favor small to mid-sized songbirds like warblers, sparrows, and thrushes.  This makes up 90% of their diet.  The remaining 10% is supplemented with lizards, frogs, snakes, small rodents and the occasional grasshopper or moth. Insects are caught on wing.

Life Cycle/Nesting:   A courting pair of Sharp-shinned Hawks may circle in the air while calling out and revealing fluffy 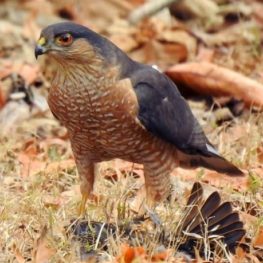 white under their tail feathers.  The pair work together to build the nest in a tall tree in dense forest cover, but it is the female whom does most of the labor.  The female lays 3 to 8 eggs.  Incubation takes about 30 to 35 days and the young fledge within 28 days.  Female Sharpies spend the majority of time on the eggs and tending to the young while the males provide food.   Both parents continue to feed the young hawks after they fledge the nest while they perfect their hunting skills.

Conservation:   Sharp-shinned Hawks suffered population decreases during the DDT era.  DDT is a pesticide used in the 1940-1970’s that is highly poisonous to birds.  In 1972 DDT was banned in the US and hawk populations rebounded.

However, the Puerto Rican Sharp-shinned Hawk was placed on the Federal Endangered list in 1994 due to habitat loss and parasites.  Climate change is also having a detrimental impact on numbers of Puerto Rican Sharpies.  In 2017 hurricane Maria killed nearly 75% of the known population from 75 to 19 individual hawks.  There is currently a captive propagation program that is partnering with the Peregrine Fund (a US-based raptor nonprofit organization) working to raise these hawks from egg to fledgling and release them into the wild. 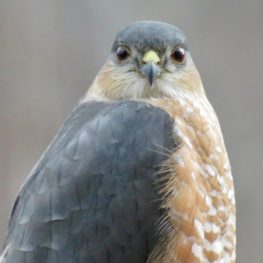 During the Fall migration more than 11,000 Sharped-shinned Hawks were seen one October day flying over Cape May NJ.

Before delivering prey to their mates or young, male Sharp-shinned Hawks remove and eat the head.

Credits/Resources for the information you found: