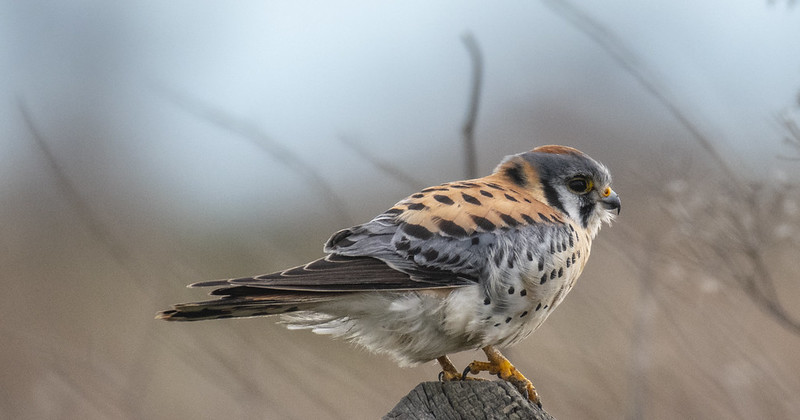 Habitat: The American Kestrel is found throughout the Western Hemisphere from Alaska and Canada to South America. They inhabit open areas with short ground vegetation and sparse trees.  They can be found in meadows, grasslands, deserts, parks, farm fields, cities, and suburbs.

Food: A Kestrel will zoom down at high speed to grab its prey on the ground and carry it off to a breeding perch. They eat a variety of animals including grasshoppers, beetles, spiders, mice, shrews, and bats. They also will sometimes eat small snakes, lizards, and frogs.

Behavior: All American Kestrels have a breeding territory that they occupy during the summer and in some areas, they also have a territory in the winter that they protect for hunting purposes. In breeding territories, the male will arrive on the breeding site before the female and localize their activity to several hunting areas and a possible nest site.  Once paired with a female they restrict the size of their territory depending the availability of food. 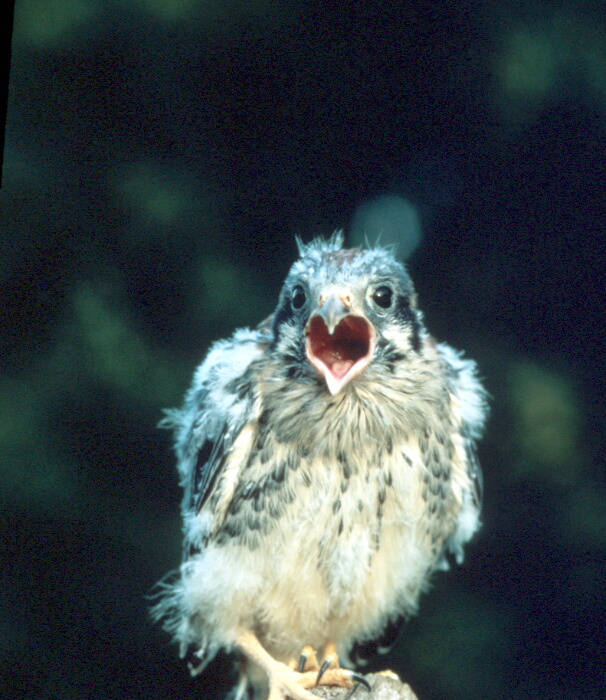 Kestrel Chick Image by US Fish and Wildlife

Life Cycle: Mating occurs when the female moves freely in and out of the male territories. This will happen early in the season, and later the female will restrict her movements to her mate’s territory. Mating can occur as many as 15 times a day over a period of six weeks. Its frequency stops when egg laying has started.  When they start mating, they will hunt together but this stops once the eggs are laid. The female stops hunting and her food is brought to her by the male. This continues until two weeks after the young are hatched; a period of 11 weeks.

Conservation: The American Kestrel is the Continent’s most widespread falcon, but its population is declining. The decline stems from continued clearing of land and the felling of standing dead trees in which they depend on for nesting sites.  Another threat is exposure to pesticides and pollutants that destroy the prey on which they depend.  In New Jersey, Kestrels are classified as threatened.  Our organization is hoping to help kestrels make a comeback. RHA has partnered with the New Jersey Department of Environmental Protection’s Endangered and Nongame Species program on a project to provide them with more places to nest. ENSP and RHA have recently put up 18 wooden boxes. Six at our preserves and 12 on private property.

Interesting Facts: Sports fans in some cities get a special show during night games – Kestrels perch on foul poles tracking moths and other insects in the powerful stadium light beams catching snacks.  Some of their hunting has even made it onto TV sports coverage!

Cornell Lab of Ornithology, American Kestrel Overview, All About Birds