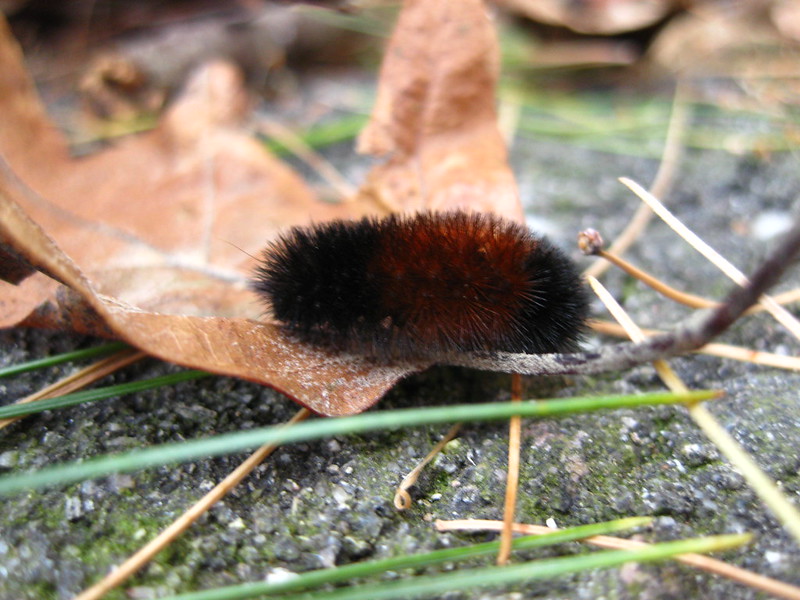 Habitat:     The Woolly Bear (aka Banded Woolly Bear) can be found in The United States, Southern Canada, and Mexico.  They are caterpillars of the Isabella Tiger Moth.  The caterpillars have fuzzy looking bristles that are black on both ends and reddish brown in the middle. They hatch twice a year.  In Autumn, the caterpillar will settle into secluded sites under fallen logs or among rocks. In April or May, they can be found in bark or rocks and enclose themselves in dark-colored oval cocoons.

Food:     They feed on many plant species including Herbaceous plants (anything that isn’t a grass or a tree) including violets, clovers, dandelions, nettles, and sunflowers.  They also like to feed on garden plants such as cabbage, spinach greens, asters and garden herbs.  Even though they stay mostly on the ground, they will sometimes feed on trees, preferring the leaves of maple, elm and birch.

Behavior:     The woolly bear will almost freeze solid in the winter during 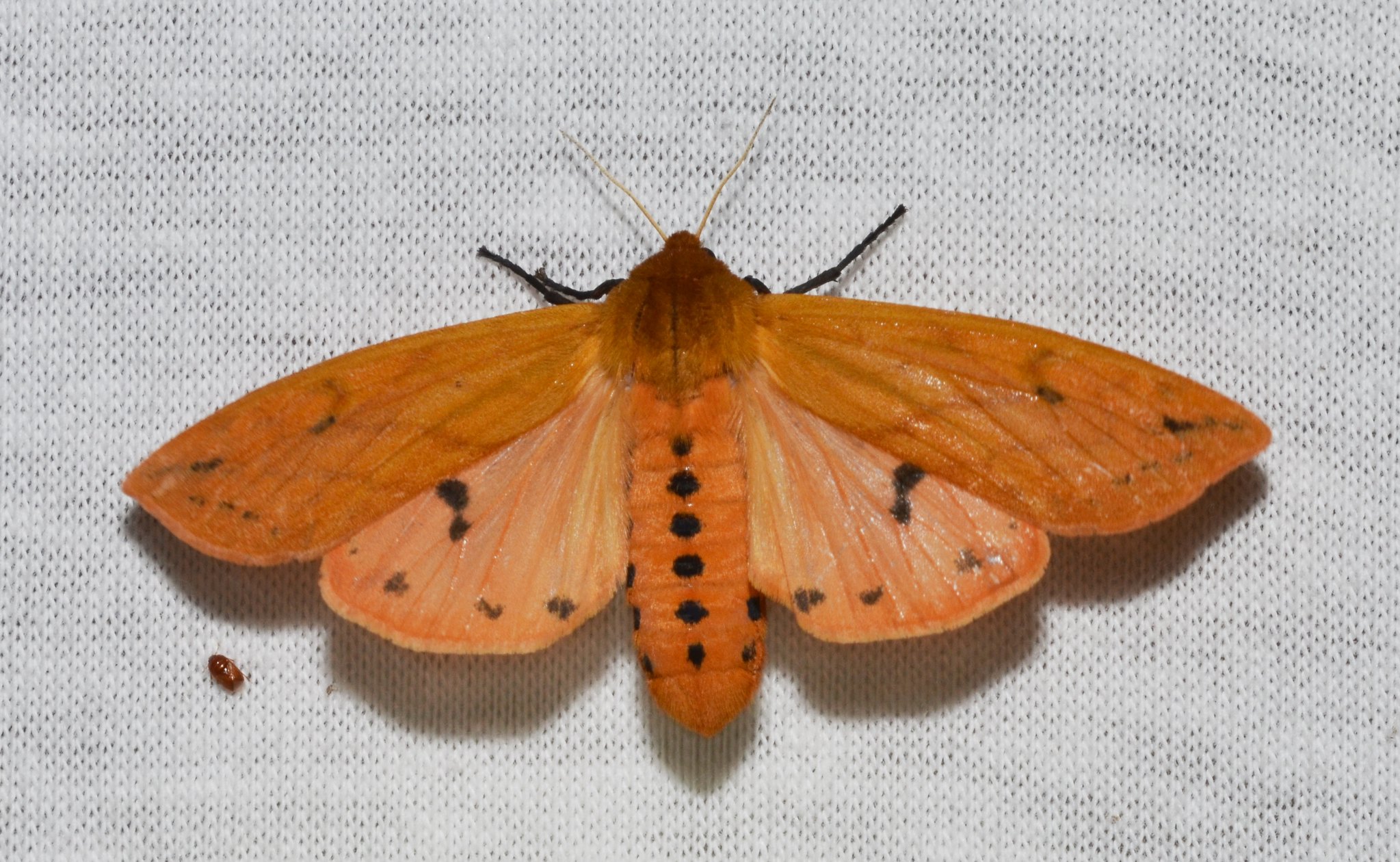 hibernation. Their body produces a chemical (cryoprotectant) that acts as an anti-freeze that protects their body tissue and organs from being damaged. When spring arrives, the woolly bear thaws out and will be active again.  There are two generations of woolly bears each year (May and August).  The second generation is the one that is most noticed in the fall as they cross the roads looking to find places under dead plant debris where they will spend the winter as larva.  In the spring they feed briefly before changing into a cocoon.

Life cycle:     Once the temperature in the spring rises, the woolly bear begins to thaw out. They wake up, spend a few nights eating and then prepare a cocoon. Once they are fully in their cocoon, the caterpillars pupate. They develop adult parts such as wings and antennae.  After a month, the moth emerges. The moths are tan or orange with fuzzy heads and several small black markings on their wings.  They do not feed. They spend only a few days mating and laying eggs before they die.  New eggs hatch within two weeks and the life cycle begins again. 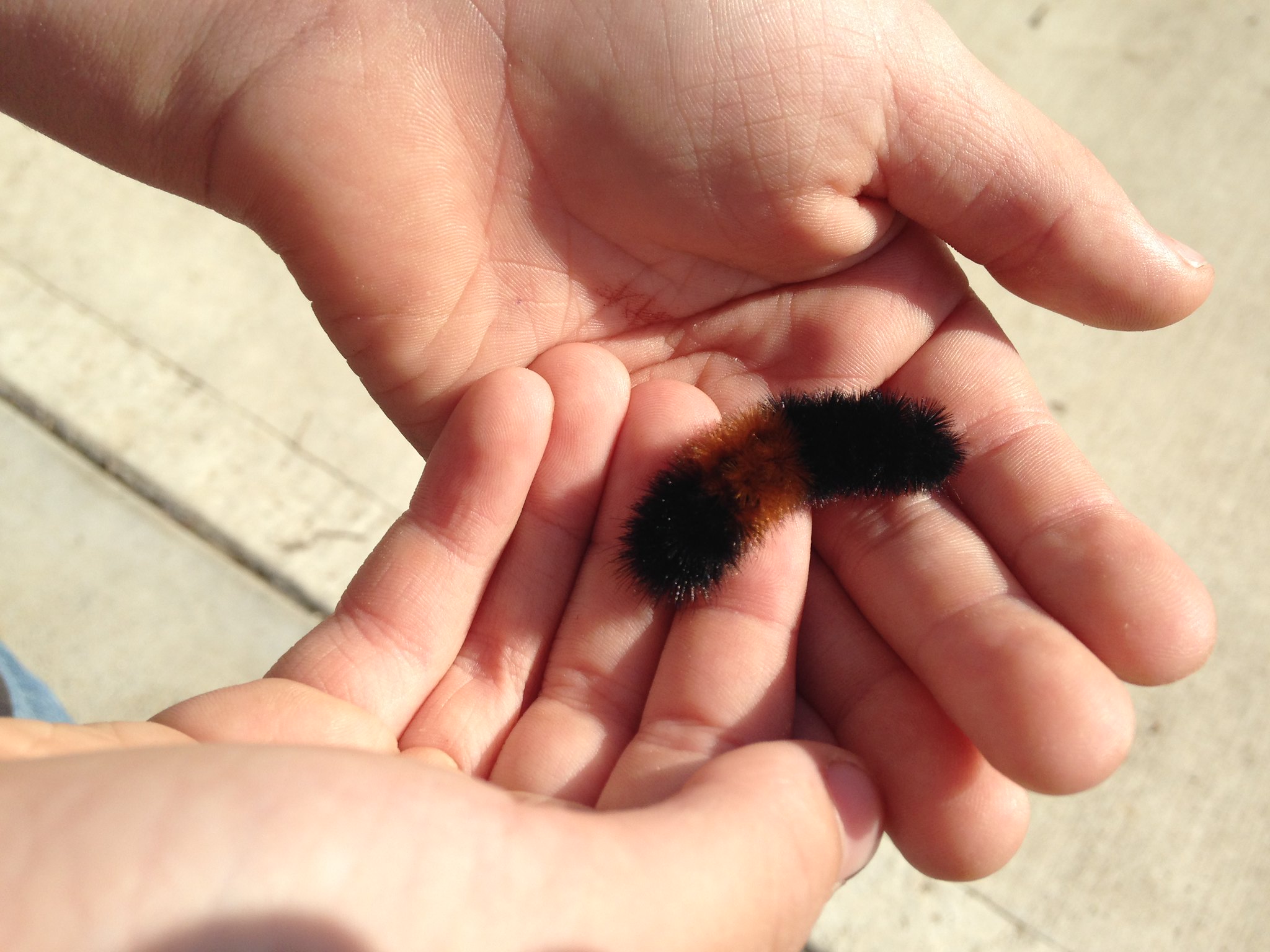 Interesting Facts:    According to folklore, woolly bears can predict winter!  Some say that if the middle brownish-red band is wide then it will be a mild winter. The blacker the band, the more severe the winter will be. For fun, take note next time you see a woolly bear. Observe a woolly bear if you see one. Notice its markings and write down what you find.  Make a prediction and at the end of winter see if your prediction is correct!