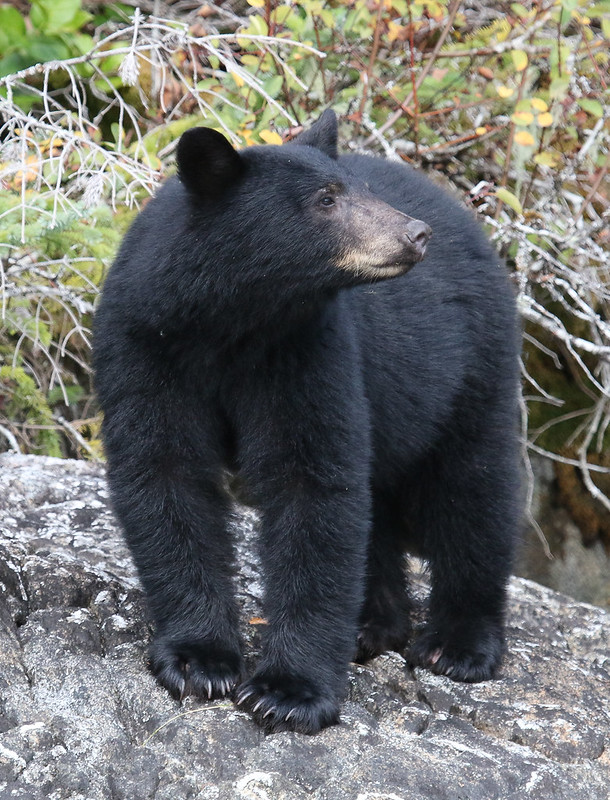 Habitat:  American Black Bears can be found throughout most of Canada and the US, into central Mexico.  They prefer living in areas with lots of dense forest cover, including swampy environments.  As they require dens for winter hibernation, they need to live where there are caves, larger boulders, or tree roots.  Habitat choice is particularly dependent on food availability.  Many black bears are quite successful living near humans, as they do in our most densely populated state of New Jersey.  Based on a recent black bear census (2018), there is an estimated 2,500 bears living in northwestern New Jersey.

Food:  Black bears are omnivores.  They consume 75% plants supplementing with small mammals, carrion, insects and fish.  In spring they enjoy a diet of grasses, tubers, bulbs, emergent skunk cabbage and insects.  In summer they add berries to their food intake.  In preparation for winter hibernation, black bears begin to eat acorns, hickory nuts and beechnuts. On many occasions their sensitive noses lead them to human garbage for a tasty treat. 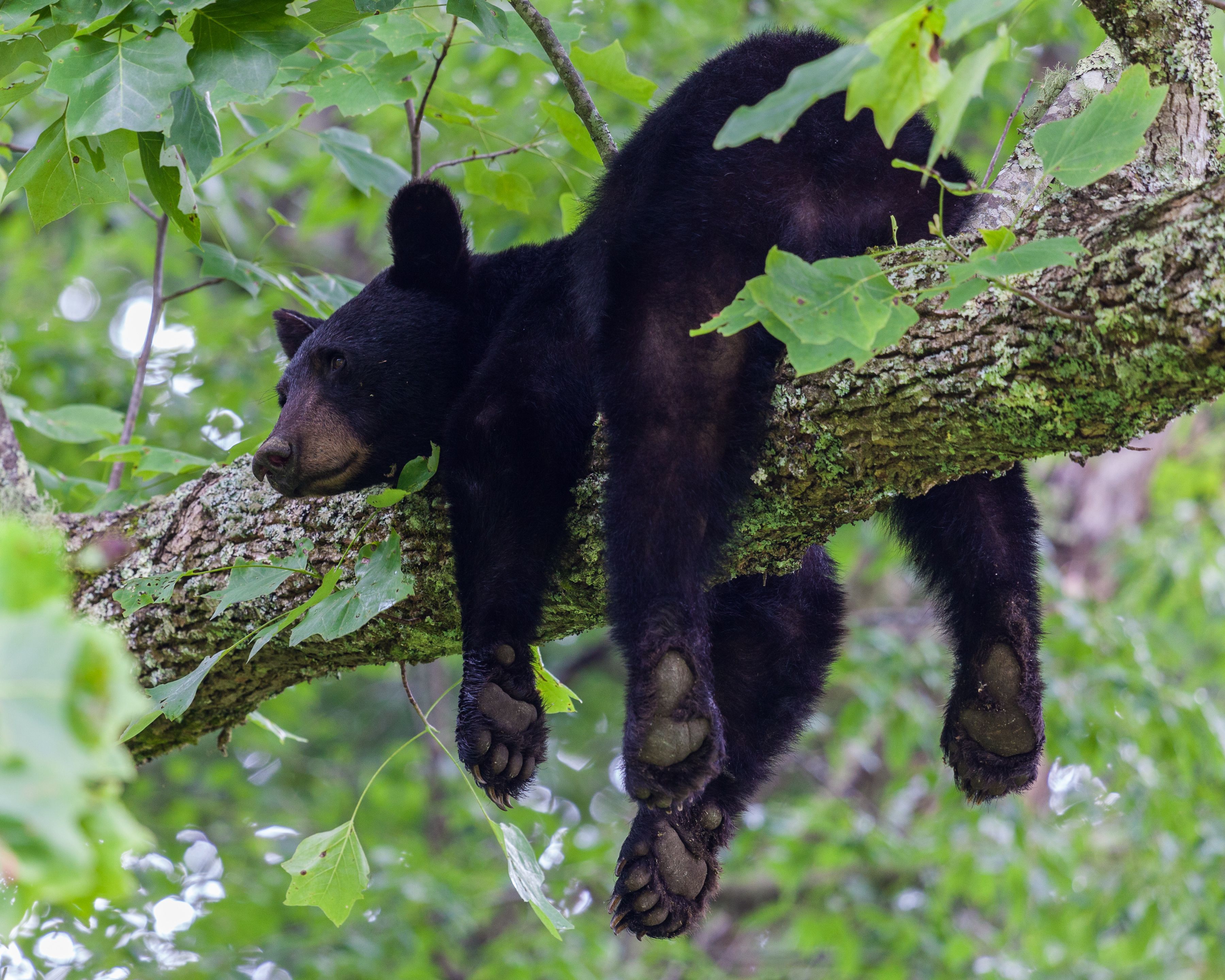 Behavior:  For the most part American Black Bears are solitary animals with the exception of breeding and when females (called sows) are rearing their cubs.  Otherwise, they tend to avoid each other.  Mostly active in early morning and around dusk, black bears spend their time resting in simple, shallow depressions of forest leaf litter. Males (called boars) reign over territories that overlapped the ranges of several sows.  They are extremely intelligent and curious and are rarely aggressive. 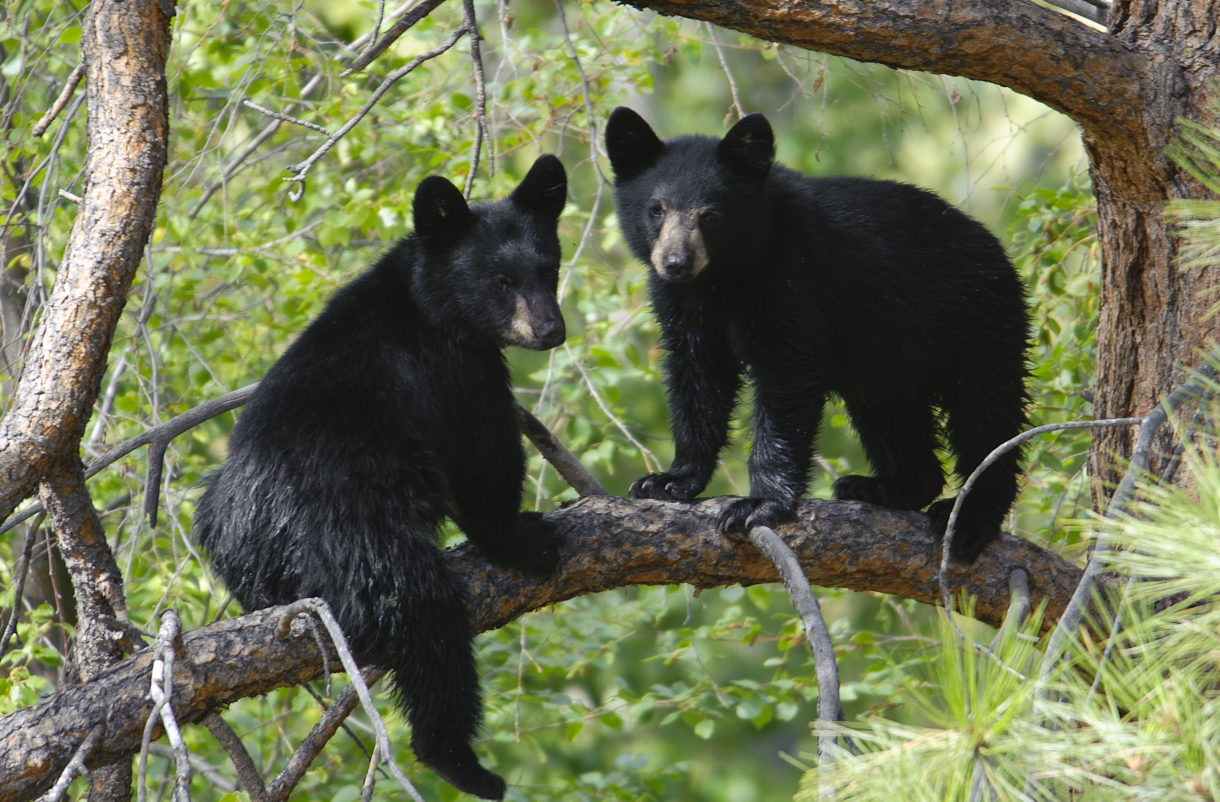 Winter Dormancy: Contrary to what most people think, black bears do not hibernate.  They may actually be active all year long depending on the severity of the winter season.  Instead of hibernation, American Black Bears enter a state of torpor where their heart rates slow and body temps drop slightly.  They do live off of body fat and can lose up to 18% of their body while in torpor.  They can be easily awakened and will often leave their dens in search of food on a mild winter day.

Life Cycle:  To ensure successful breeding, boars and sows mate with multiple partners starting in late May thru August.  In late October the sows enter their dens for their winter torpor.  Born blind and naked in late January, the cubs quickly grow on their mother’s milk which is high in protein and fat.  A black bear sow births an average 3 cubs and by April they are ready to leave the den.  The cubs will remain with their mother for 18 months until she aggressively chases them away.  The sow is then ready to breed again.  The American Black Bear can live to be 30 years but in New Jersey the average lifespan is 10 years due to human interactions. 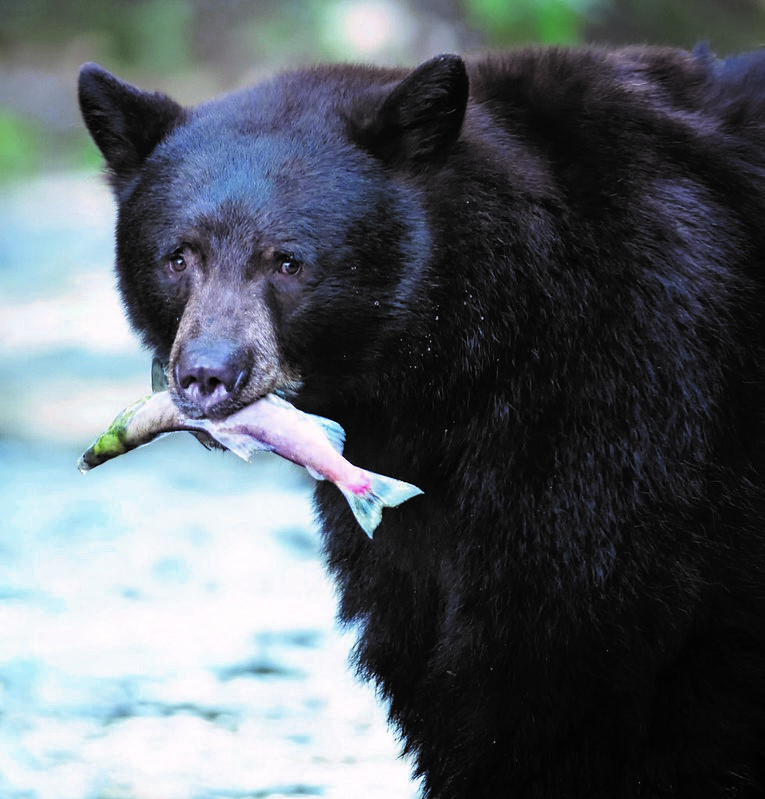 Conservation:   In 1992 The Bear Group, a program of Animal Protection League of NJ, was formed in response to the Division of Fish and Wildlife (DFW) stating they want a bear hunt.  Finally, in 2003 after years of collecting bear complaints from citizens and bear smear campaigns in newspapers, the first bear hunt is held since 1971.  Over 330 bears are killed and   public opposition was so severe that the Governor McGreevy said another hunt would not take place.  Ignoring a Supreme Court ruling the DFW proceeds in 2005 with a second hunt that kills 298 bears.  In 2006-2009 there is a ban on the bear hunt during the administration of Gov. Corzine.  During his campaign for governor, Christie promises hunters that there will be a bear hunt and in 2010 592 bears are killed during that year’s bear hunt.  Since that time approximately 2300 bears have been killed in the hunt.   A decrease in bear population between 2010 to 2018 is 27% (from estimated 3400 to 2460).   At this time the Black Bear is not considered endangered but the controversy regarding bear hunting in New Jersey continues to elicit strong viewpoints.

Interesting Facts:  Black Bears do not typically urinate or defecate during torpor.  Their kidneys reabsorb any small amount of urine they may produce.