Identification:  The Northern Water Snake is a non-venomous snake that range in size from 2’ to 5’.  Their base color is brown or gray with darker brown, reddish or black bands on the back shaped like a reverse hourglass.  The belly is usually white, yellowish, or orange.  Older snakes are much darker in color and the banding pattern can be difficult to make out.

In New Jersey the Northern Water Snake is often misidentified as the venomous Northern Copperhead.  Notice that the bands on the copperhead are hourglass shaped. 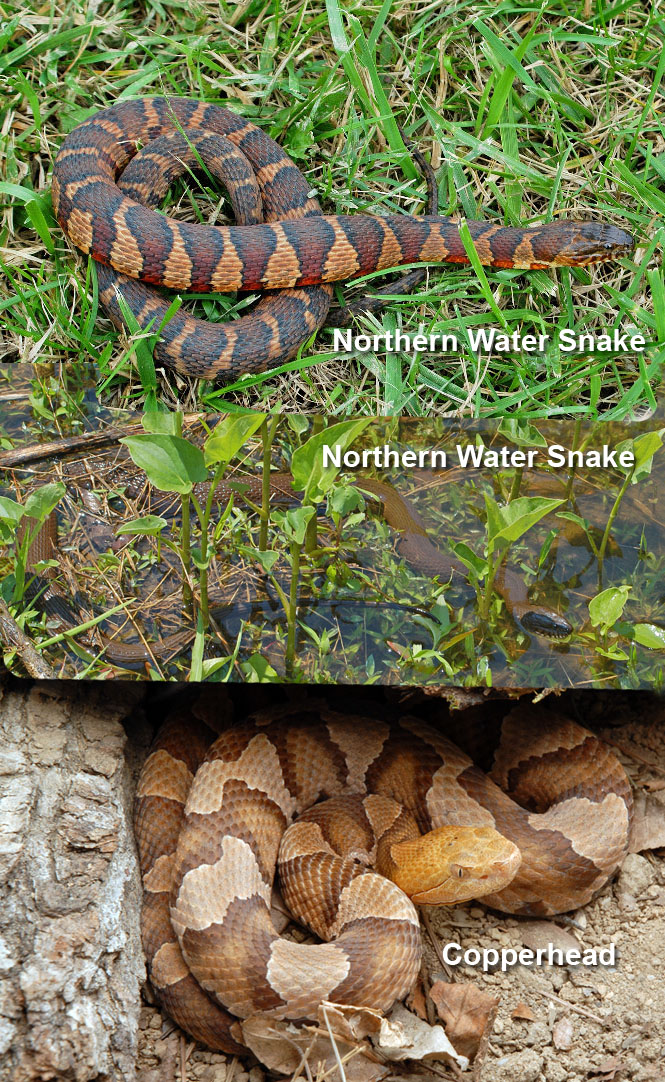 The harmless northern water snake and venomous copperhead are often confused, but their patterns are distinct.

Habitat:    The Northern Water Snake is a common snake found in southern Ontario and the northeastern US from Nebraska and Kansas as far south as North Carolina.  It is one of the most common snakes in New Jersey and can be seen swimming along a river or stream, across a pond or a lake.  When not it the water they can be found basking in the sun at the water’s edge.  They also inhabit marshes, bogs and swamps.

Behavior:   During the day, when not hunting, water snakes spend time basking in the sun.  They are mostly solitary.  These snakes are non-venomous but if disturbed can be quite aggressive and may bite.  It is always best to be respectful by giving them plenty of space to retreat. 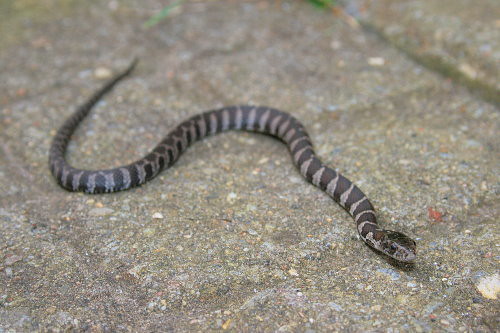 from April to June.  About 4 months after mating she births up to 99 live offspring.  The young snakes are born totally independent.

Conservation:  Northern Water Snakes are not deemed threatened throughout their range in North America.  Here in New Jersey they are one of 22 species of snakes inhabiting the state.  All snake species in New Jersey are experiencing population declines due to habitat destruction and changing land use.  Under the NJ Endangered and Nongame Species Conservation Act, it is illegal for anyone to kill, collect or harass any of our native snake species.

Interesting Facts:  Northern Water Snakes sometimes escape their predators by diving underwater and anchoring themselves to the bottom. They can remain underwater for 90 minutes if necessary.

https://www.nj.gov/dep/fgw/ensp/pdf/snake_broch.pdf  Informative brochure speaking to all snakes found in NJ