Kestrels are ambassadors for the connection between what we do on the land and the health of our water. – Cindy Ehrenclou 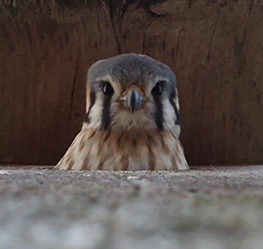 Adult male American Kestrel peaking out of a nest box on a partner property. Photo by Bill Pitts.

Meet the American Kestrel, our smallest falcon species.  It  is one of the most colorful and widespread raptors in North America. Insects as well as small birds and rodents make up their preferred diet. When hunting, they often spend time perched in open areas on telephone wires and fence posts, so you have likely seen one before.

Kestrels were once very common in the Upper Raritan, but over the past 50 years they have become rare as their populations have declined by over 80 percent in the northeastern United States. Kestrels prefer open habitats such as meadows, pastures, agricultural fields, and forest clearings, which are abundant in the Upper Raritan Region of New Jersey. They are cavity-nesters (nest in holes), often in large, isolated trees in open fields. With the advent of “clean” farming practices removal of trees and brush between working fields has become common and with it the loss of preferred nest sites for kestrels. While factors such as loss of habitat, use of pesticides, planting of monocultures of row crops, and competition for nest sites by invasive species (e.g., European Starling) contribute to the decline of kestrels, placing nest boxes throughout our watershed will promote their recovery. 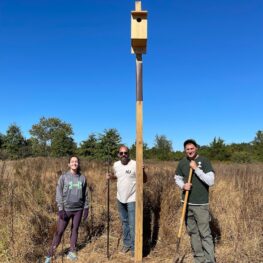 Raritan Headwaters Kestrel Partnership – Raritan Headwaters (RHA) initiated the Kestrel Partnership in 2018 to help in the recovery of this threatened species while also imparting best management practices (BMPs) to benefit all wildlife (over 60 species of grassland/meadow birds) while protecting water resources in the Upper Raritan Watershed. In collaboration with NJDEP’s Endangered and Nongame Species Program, RHA is installing and monitoring kestrel nest boxes with partners including land trusts, public land managers, private landowners and farmers. The goals are to increase the kestrel population over time by giving them a head start in finding a place to build their nests and raise young.

How to Get Involved 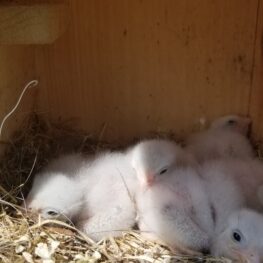 Hope for the future of the American Kestrel – Recently hatched kestrels in a nest box at RHA’s Fox Hill Preserve in Tewksbury, NJ.  Photo by Bill Pitts.

Top photo of an American Kestrel bringing prey to its young at Fox Hill Preserve by Dallas Hetherington.